This was originally written September 20, 2008. It's a very informal look at how much money individual American workers donated to different political parties back then -- and it is a shocking amount of money, even before the 2010 Supreme Court Citizens United ruling that allowed businesses to donate freely. It relies on the public donor data supplied by the database FundRace, which used to be hosted by The Huffington Post at the now-defunct site: fundrace.huffingtonpost.com. This URL must have faded around 2012 or so, according to when the Post's references to it stopped. As of 2016, another website, OpenSecrets.org, run by The Center for Responsive Politics, has a similar public political donor database and lookup functionality, so you can use it to do similar investigations. The spreadsheet of my collected data from 2008 is downloadable in the references at the end.

Recently I wondered how different American professionals -- especially orthopedic surgeons since I deal with them at work -- feel about politics. That led me to FundRace 2008, a fascinating tool that lets you see who's giving money to the Democratic and Republican campaigns this season, and how much. And, boy, there's a lot of cash. Here's what I found out, as of mid-September: 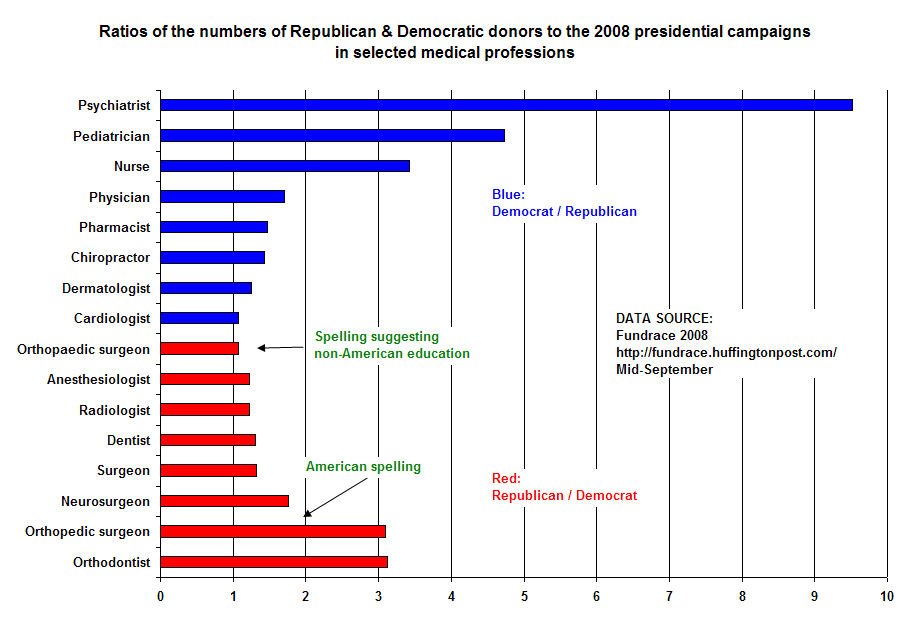 Orthopedic surgeons? Republican by 3:1. Amazingly in line with my expectations. However, note that people who listed themselves as orthopaedic surgeons, with the British a, are less Republican than the ones who spelled it the American way. I think that reflects the effect of internationalization turning people more Democratic.

Also the professionals who make more money and are more male-majority, which include surgeons, generally are more Republican. The lower paid and more female-majority professions are more Democratic. And psychiatrists? Damn. I guess that doesn't help the stereotype that those who deal with psychoactive drugs lean more Democratic (by almost 10:1). 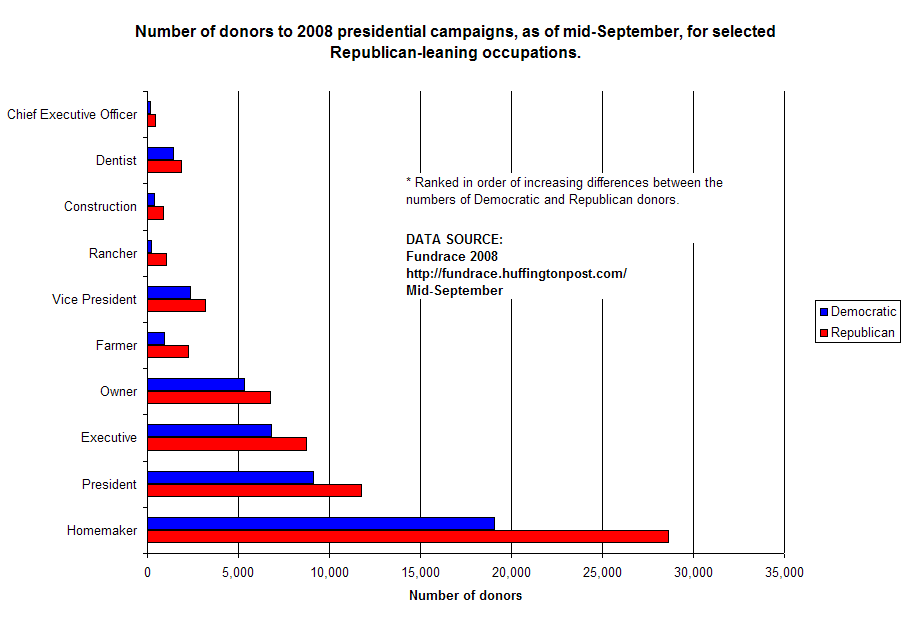 I was shocked. I shouldn't have been, I guess, but look at the homemakers compared to the dentists and executives. I checked a bunch of different occupations, and these were at the top. They are the wives of rich people, maybe. I'm sure the Fundrace people have their own pool of data for better analysis, but this is interesting for me nonetheless. 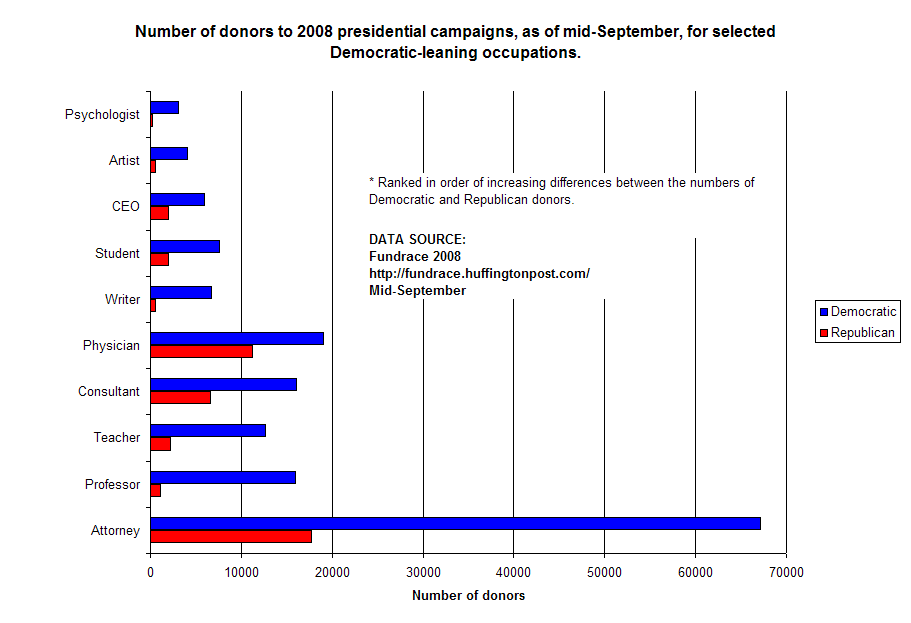 Holy crap. Look at the attorneys. I suppose I shouldn't be surprised again; there were (at least?) three trained lawyers in the Democratic primaries. Obama was a law professor, a combination of two Democratic top donor professional groups. The blue donors are educators, doctors, artists, people who went or go to school, people who help others for a living or interact with those who do. I would call them capable of focusing on the interests of others outside their turf. 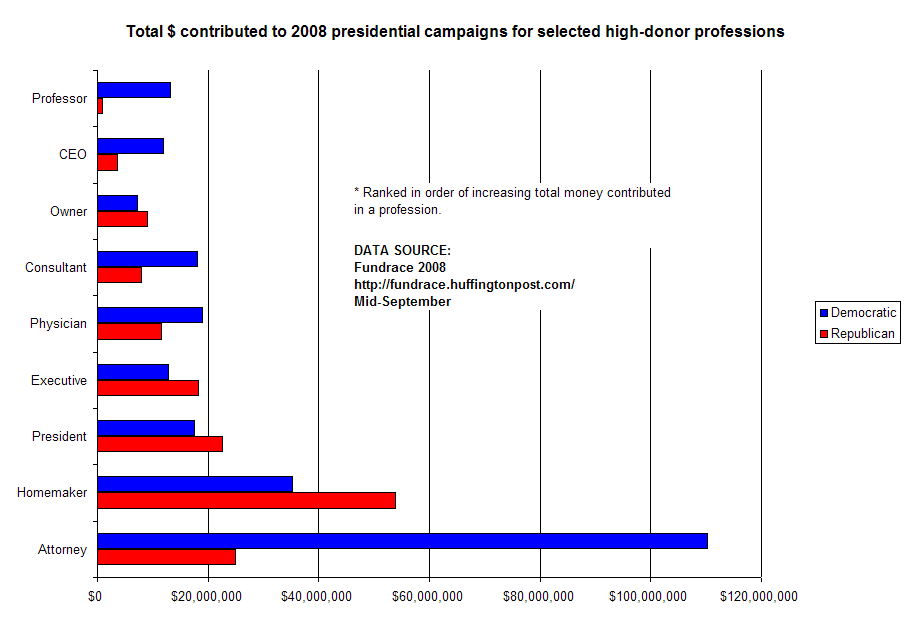 Of all the people with money to give this year, these are some big givers. I'm still awestruck by the money fight among attorneys, stay-at-home moms, and everyone else. 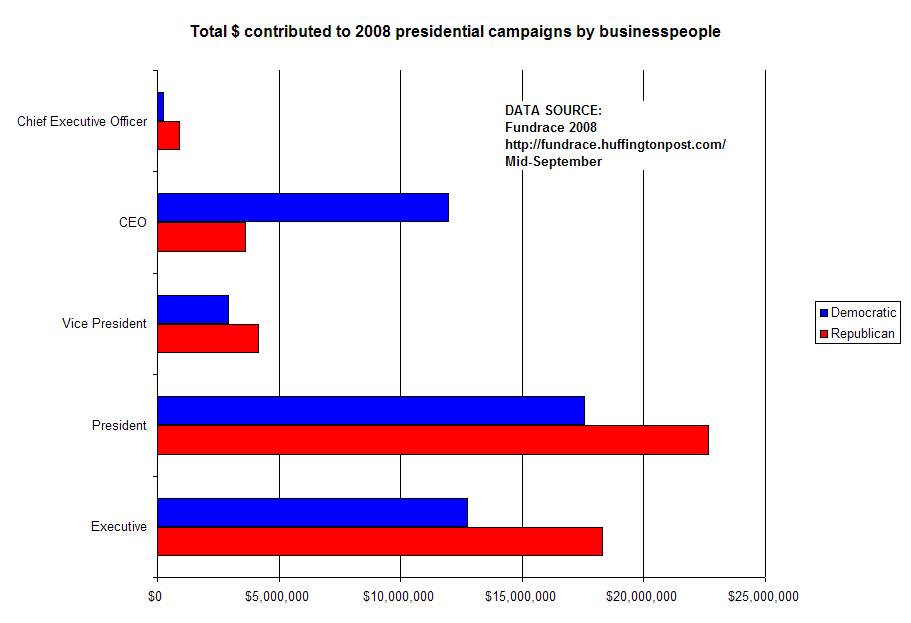 Business likes Republicans -- unless you're a CEO? Interesting. I guess that raises the question: "What's the difference between a CEO and a President of a company?" Maybe it's abortions. 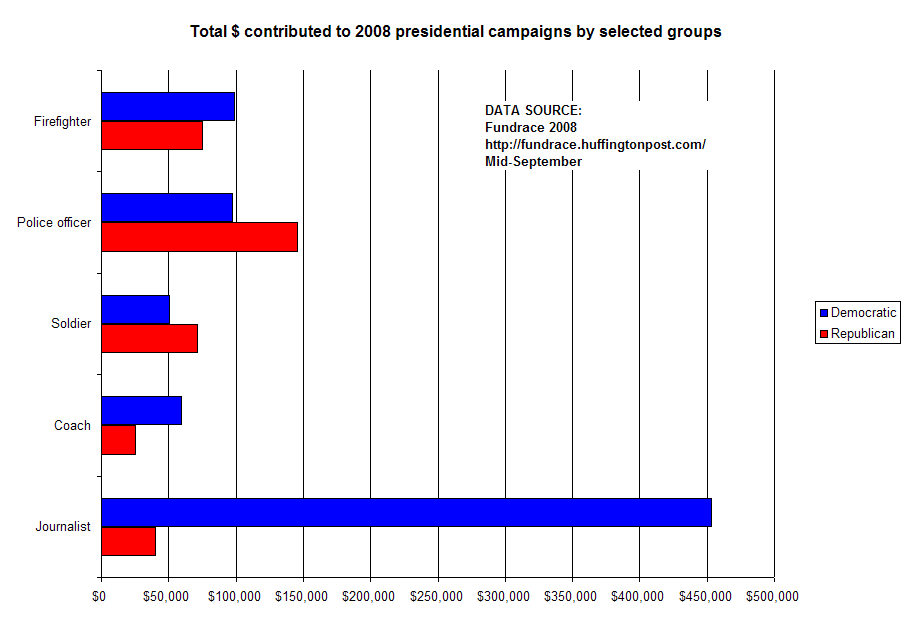 Those interested in security give more money to Republicans, generally. The rescuers lean Democratic. And dang, guess that whole "liberal media bias" phrase has some truth to it, subtle or not. 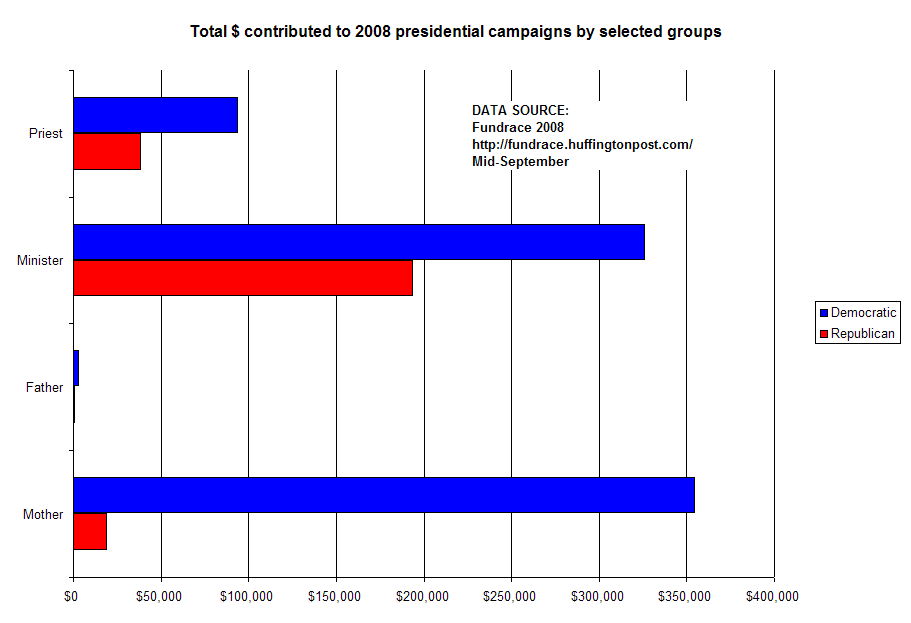 Isn't it fascinating how "homemakers" donate much more money to Republicans, but "mothers" donate relatively heavily to Democrats? There might be some sociological or psychological difference between women who identified themselves as those two different words. Self-identified "fathers" are few and far between. The religious leaders, likely Christian, lean Democratic and not Republican, or at least the ones who are okay with donating to political campaigns do.

Granted, all these data include primary season donations, instead of just donations toward McCain and Obama alone, but they still give an important impression of political demographics in the USA. They also show who has the money. This is a psychoanalysis of the nation. 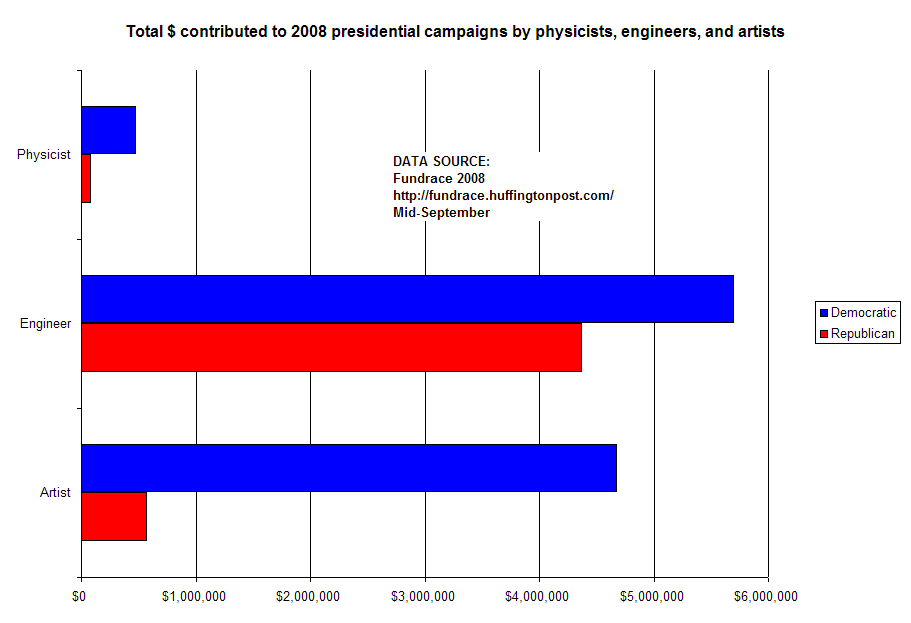 Oh, and apparently geeks love Obama in cash by 2:1.

I'm sure people have previously studied how individual workers donate their money to political parties and causes, but a quick search on Google Scholar (as of 2016) doesn't seem to reveal the sweeping study that I'd like to see in the top page of hits. You see, I'm looking for a study on all professions over all of American history, broken down by geography, income bracket, and political ballot. It should also compare its findings to how collectives of workers donate, such as in unions; and also compare to how collectives of corporations donate, such as in superPACs. I want the study to break down the data in nice infographics and charts, and I imagine it giving leaders a more granular picture of American political priorities for different groups.

So not only am I too lazy right now to dig deeper for all this information than the first page of a search engine, but also the ideal study that I'm looking for is hard to produce. Not just hard -- it's several people's PhDs. Even if it existed in an organized way, this information might take a while to digest, too. Yet here I am asking for it like it were a pop tart. So when I find this perfectly produced and packaged study, or sequence of studies, I will gladly read it, after crisping it in the toaster to enhance its flavor, but until then I hope someone works on these academic questions and how to present the answers.